It may be cute and tiny, but Lil’ Nitro is no joke. Sporting a Scoville rating reashing well into the millions of units, this chewy treat is 900 times hotter than a Jalapeno, making it the world’s hottest gummy bear. 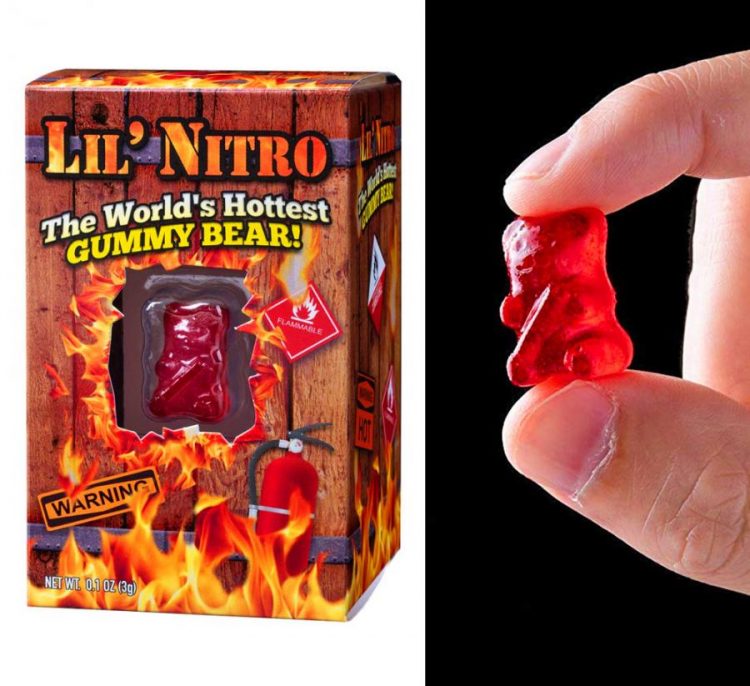 The pepper extract used to make Lil’ Nitro is rated at a whopping 9,000.000 Scoville units on the hotness scale, so even though this scary treat has other ingredients, it’s still rated up to 7,200,000 million units. To put things into perspective, the dreaded Carolina Reaper pepper has an average rating of 2.2 million units. So yeah, this thing’s pretty darn hot.

Lil’ Nitro gummy bears come packaged individually in blister packs and boxes evocative of their hotness. People usually eat gummy bears by the handful, so one may not seem like much, but according to Vat19, one “is more than what you’ll ever need”.

While one Lil’ Nitro gummy bear probably won’t kill you, it will leave your mouth, throat and stomach feeling like they’re on fire, so eat it at your own risk. Just make sure to keep it out of reach of children, as this is no ordinary sweet.

And just in case you’re wondering, Lil’ Nitro is technically raspberry flavored, but you’ll probably have trouble tasting that over the fire that engulfs your mouth after you chew into it.

If you’re feeling brave, you can order a Lil’ Nitro Gummy Bear from the Flamethrower Candy website, for $6.99.